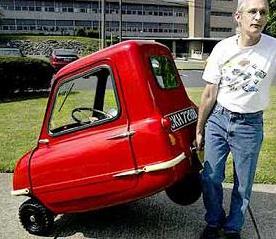 You probably know the world’s fastest car and the world’s most popular car. But did you ever wonder what the world’s smallest car is?  I’ve been fascinated with cars recently and while I was searching online, I came across with the smallest car that men have ever built.  The miniature car undoubtedly fascinates ever person who sees it. It’s such a cute but real thing.

What is the Smallest Production Car in the World ?

What do you think? Is it fun to drive this small auto ?  I think it is!   Well, meet this car personally at Ripley’s Believe It Or Not.