Who is the Tallest Man in the World Today 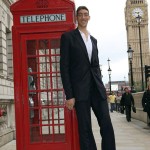 Sultan Kosen is the world tallest man today but he’s still not the World Tallest Ever in history.  He would still look upward to Robert Pershing Wadlow – the World tallest man ever who walked the earth.  Robert Wadlow’ height was 8 foot 11 inches tall.  He lived at Alton Illinois from 1918 to 1940.  Robert Wadlow died because of faulty leg brace which causing a large blister which then led to major infection.

Tallest Man in the World @ infowise101.com

Yes, Many say that maybe his real height is from 7″6′ to 7″9′ tall. I also read from one comment on youtube that Leonid Stadnyk also refused to stand next to Yao Ming because according to the commenter Leonid was so embarassed towering over one of the tallest player in NBA but the real reason is that Stadnyk seemed to be afraid because Yao Ming seems to be taller than him.

hahaha, that would be really scary & funny if you saw Robert Wadlow in the middle of the night and you’re alone. He stood almost 9 feet tall. if that happens to me i will also run at 120 mph or even faster. haha.

Super Very tall, imagine walking in the dark, and suddenly you saw the world’s tallest man – Robert Pershing Wadlow walking behind you… I might become the world’s fastest man that can run at 120 mile per hour. :lol:

I just want to give you some kudos for exerting effort in posting this entry and in coming up with this. I’m looking forward to more of your blogs.