Watch: Samsung Galaxy Note 7 Told Consumer To Stop The Use of Device After Explosion 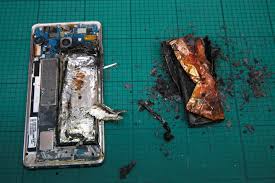 Samsung told international consumer to stop using their Galaxy 7 Note smartphones as exploding incident  of the said gadget made headline news. The world’s top smartphone makers said it has asked all global carrier to stop the sales of Note 7 and the exchange of original devices for replacements while they worked on an investigation on reports on fire and fueling expectation.

Top US and Australian airline company suspended the sales or replacement of the Note 7 while major aviation company bans on passenger using the phone after a smoke incident of the said device forced to leave a passenger plane in the United States last week.

The giant conglomerate withdraw 2.5M phones in September after complaints of exploding batteries and later guaranteed users that all replaced devises were safe.

Because consumers’ safety remains our top priority, Samsung will ask all carrier and retail partners globally to stop sales and exchanges of the Galaxy Note 7 while the investigation is taking place,” the company said.

“Consumers with either an original Galaxy Note 7 or replacement Galaxy Note 7 device should power down and stop using the device and take advantage of the remedies available,” it added.

The blame appears to be cause by the devices lithium -ion battery which maybe prone to overheating, causing fires and explosion but it is still uncertain if how would the company’s problem be fix.