Still not surviving in the aftermath of the Typhoon Yolanda and here’s another
problem that is a big threat to the security of the women there in Tacloban.

There are reports coming out about the incidents of rape on some areas in Tacloban, mostly in Christina Village. According to the two women on the photo being interviewed by Kabayan Noli de Castro, there are some bad guys who forcibly enter houses, take the food and other stuffs and rape the women. 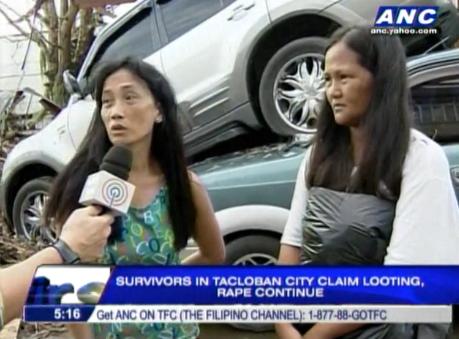 In a separate interview by kabayan Noli de Castro,  one survivor said:

”It’s the criminals who escaped from the prison. They’re raping the women,”

I really can’t believe that in the middle of disaster like this, there are other bad people that could do such things. WTF. These people are really taking advantage of the situation.

What can you say about these devils. Don’t forget to leave your comment below.

they are not human…

How about the PDAF Rapist, What is your comment?

They should be skinned alive to death