During Anderson’s report on Wednesday, He said that the goverment seems very slow in helping the people.

“No evidence of organized relief  and rescue operation around Tacloban. I haven’t seen much of relief effort, I haven’t seen a large military presence.” Anderson said. 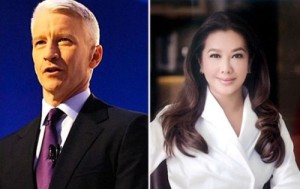 Korina then reacted on radio show and she said:

Netizens reacted negatively to her, they said that instead of thanking Mr. Anderson for going all the way here in the Philippines just to report and help the victims, she is criticizing him.

Now it has been 3 days that Korina doesn’t show up in TV Patrol. Many people
believe that she has been suspended by the network for what she did.

What do you think? Don’t forget to leave your comment.