A photo of a mermaid is now getting viral on Social Media such as Facebook and Twitter. The mermaid was allegedly caught by a fishermen. The viral mermaid was uploaded just a few hours  and easily got a few hundreds likes on Facebook and other social media sites. Is it Real of Fake? What do you think? 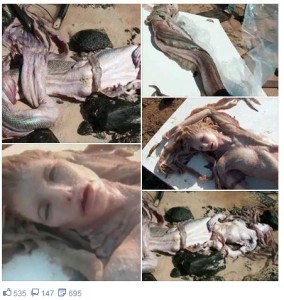 Upon reading on some of the comments on facebook, I found out that these photos were just fake. And according to the commenters, this viral mermaid was made by Joel Harlow, one of the best makeup artist in American Motion Pictures and was also featured from the set of fantasy swashbuckler film Pirates of the Caribbean: On Stranger Tides.