During the typhoon yolanda, it was reported that a lot of people broke into
grocery stores and stole food and other stuffs.  There’s even a report that one thief took close to 500,000 Pesos when  he broke into the house and took cash, gold bracelet, digital camera,  gold earing, diamond ring from a rich Chinese Family.

And now a lot of netizens got mad to Senator Chiz Escudero on the photo I saw being shared on facebook.  On the photo he says to arrest all of the people involved in stealing during the typhoon Yolanda. He says that all thiefs during typhoon Yolanda should be held liable, arrested and put in jail. 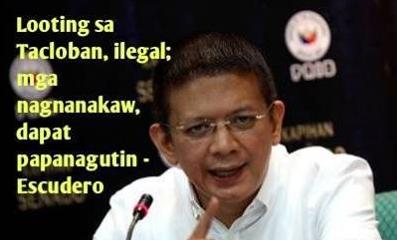 Most of the netizens reacted negatively to him. They are saying that the Senator could only say that because he is not a victim and he doesn’t feel the hunger the same way the victims can feel it right now.

They also added that why is the senator could see them while he is ignoring the big men in the government that are involved in corruption like the pork
barrel scam.

Here are some of the people’s reactions I got from facebook.

How about you? What can you say? Don’t forget to leave your comment below.

YOUR HONOR! TUMAHIMIK KA NALANG KUNG WALA KANG MAISIP NA MASABI! OR I WOULD LIKE YOU TO MOVE YOUR ASS UP!! FROM THAT CHAIR AND STOP TALKING IN THAT MICROPHONE AND GO PERSONALLY IN THE SCENE AND I WANT TO HEAR A WORD FROM YOU AGAIN ONCE YOU ARE THERE! OK? THOSE THIEVES OR LOOTERS ARE SURVIVORS AND THEY ARE STILL SURVIVING BECAUSE OF YOUR IN CAPACITY TO ATTAIN TO THEIR NEEDS!! WORLD LEADERS ARE NOW MOVING! SENDING TROOPS TO HELP THE VICTIMS! AND THEY KNOW THE LEVEL OF RISK THEY WILL BE FACING! BUT YOU'VE NOT HEARD FROM THEM WHAT ACTION THEY WILL DO TO AFFRONT THIS DANGER!! ARE YOU NOT ASHAMED OF WHAT YOU'VE SAID? ME? YES I AM ASHAMED TO HAVE ONES SHARED MY VOTE TO HELP TO PUT YOU THEIR IN YOUR DIRTY SET!!

pagmalaki ang ninakaw… may coffee moment with the President.. may bodyguards at nasa airconditioned rooms…

Definitely right! Instead of stealing luxury gadgets, they should have taken "Foods" only. They are hungry dapat food lang, d naman nila makakain mga yan e. Ang iba kasi nananamantala. They're taking advantage of the situation which is not right to my point of view.

i agree wid you Anthony ssi…

It all begun when TV orgs, these differently-minded reporters or broadcasters aired on national tv this looting in full footages and exhaustive coverage without having done any reasonable act to stop the apparent crime from being committed. We have a very irresponsible press, not knowing what to keep, not sensitive on what to show and of course, the spin it delivers to a revering audience. Tri-media is in that very real sense, highly irresponsible. Now call MTRCB, please. Suspend the TV orgs.

there is a big difference between someone stealing due to dire circumstances and life-or-death situations and due to greed. how can a millionaire sit there and talk about the law when any semblance of hope and order have been destroyed? yan ang Pinoy na pulitiko, matinik sa batas laban sa mga walang kapangyarihan.

Looting of foods or drinking water for survival is acceptable during calamity where relief goods are not readily available but to ransack one’s property or robbing of valuable items is unlawful and punishable by law.