88M Worth Of Shabu Confiscated In Albuera Leyte 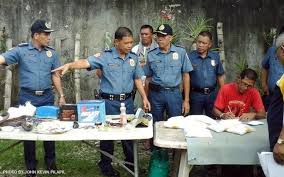 Authorities confiscated an amount of 88M worth of shabu and other paraphernalia and ingredient in making a bomb in a raid at the ancestral house of Albuera, Leyte Mayor Rolando Espinosa Sr. Wednesday, morning.The The Leyte Provincial Police and the Philippine Drug Enforcement Agency headed the anti-drug operations at Espinosa’s home in Barangay Benolho at around 6:20 a.m. They collected 11kilos of shabu along with the chemicals used in making bombs.A few police uniforms was also recovered in the scene. Albuera Police Chief Jovie Espenido said they got an intelligence report that there were illegal drugs in Espinosa’s house and then obtained a search warrant from Baybay City Regional Trial Court Branch 10 judge Carlos Arguilles.
The house was owned by former Mayor Rolando Espinosa Sr. . He surrendered to PNP chief Rolando ‘Bato’ Dela Rosa last week August 1.He was one of the alleged protectors of drug syndicates in the country whom the President Duterte revealed. He admitted that he used to be a drug lord and thus his son Rolando ‘Kerwin’ Espinosa is the top drug trafficker in Visayas.’Kerwin’ was still in the loose while facing a standing warrant of arrest for the drug related activities his in.