An Assassination Plot Against Duterte Revealed 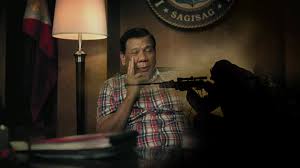 Wilford Palma a helper and a suspected gun smuggler was arrested by Criminal Investigation and Detention Group  ( CID) operatives in an operation against loose firearms at Villa Cristina Subdivision in Baranggay Tangub last August 6.

Authorities confiscated smuggled gun parts worth P4.5 million from Palma and his boss Bryan Tala-ala which was said to derived from the United States to Bacolod. At a press conference on Thursday at Camp Crame Philippine National Police Chief Ronald “Bato” Dela Rosa presented one of the arrested suspects Wilford Palma who disclose that they sold gun parts that could be assembled into more than 100M-16 rifles to a client who said “he will use the guns to assassinate President Duterte.”

“My boss sold more than 100 upper receivers ,40 barrels, 30 bolt assemblies to the client Palma added. Tala-ala who is Palma`s boss was confined in a hospital in Bacolod after his arrest due to health issues.

President Duterte in other hand was undaunted about the assassination reports as “he eats threats for breakfast”.