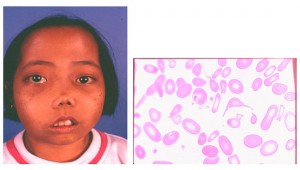 Thalassemia which is also known as Mediterranean Anemia, Homozygous Beta Thalassemia or Cooely’s Anemia is a group of inherited disorders. There is a fault in the production of hemoglobin which is an essential pigment found in red blood cells. The major function of this pigment is to combine with and carry oxygen from the lungs and deliver it to all body tissues. It actually contains a large amount of iron. For patients with Alpha Thalassemia, the hemoglobin breaks down sooner than normal, which leaves the person with insufficient haemoglobin in the body. This health problem is a different kind of anemia.

Thallasemia happens when there is insufficient haemoglobin plus it is also caused by inheritance of a defective gene.  The trait is present at birth and remains the same for life. It can be handed down from parents to offspring. It is common among individuals whose families are from Africa, Mediterranean region, and Central Asia.

What is Beta Thalassemia (Thallasemia Major)?

It is a very serious blood disease that starts in early childhood. Babies with this illness are normal at birth but become anemic between 3-18 months of age. A child with this disease and goes untreated usually dies between one and eight years of age.

Signs that a Child has Thalassemia Major

The primary treatment of this disease is regular blood transfusions, every four weeks. It is also recommended to have injections of Desferal which are given under the skin from a small pump 5-7 nights a week. This is to help the body flush out the extra iron produced by the new blood.

Consult a doctor if you happen to see your child having this disease. Check if there are dugs that could be taken to address the problem. For patients, you also need to know if there is a kind of diet that needs to be followed to give the patient proper care and treatment.