Jocelyn Wildenstein Before and After Plastic Surgery

Jocelyn Wildenstein - Before and After Plastic Surgery

Right after I’ve posted an entry about Bruce Jenner’s cosmetic surgery which has gone wrong. I decided to browse more about celebrities who had bad and awful plastic surgery thus putting them on the list of the worst plastic surgery ever.

And with that, I happened to bumped into the pictures of the celebrity dubbed as “The Bride of Wildenstein” which was taken from “The Bride of Frankenstein”.  She’s also called the “real catwoman”.  The lady’s name is Jocelyn Wildenstein. Would you believe that she actually spent $4 million for the services of the plastic surgeons and only turned out to suffer from the disasters of undergoing the knife?  Let’s get to know her more and take a peek at Jocelyn Wildenstein before and after pictures.  (Click on the photos to enlarge) 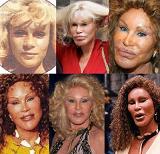 jocelyn wildenstein - Before and After Pictures

Jocelyn Wildenstein who hails from Switzerland is a socialite after being married to a billionaire art collector Alec Wildenstein. It was when she was fifty years old that she opted to undergo series of cosmetic surgery after she found out that her husband is having an affair. She wanted to keep her husband that she resulted to undertake drastic measures by asking a plastic surgeon to let her look more “feline” just like how her husband loved his jungle estate.

She has undergone a lot of silicone injections to her cheeks, chin, and lips. And yes to appear more feline, she had eye reconstruction and a couple of facelift. Jocelyn Wildenstein’s case only proves that money can’t buy everything. Also, I’m left wondering if she still considers undergoing correction regarding her surgical mistakes.  Meanwhile, let’s feast our eyes on Jocelyn Wildenstein before and after photos.