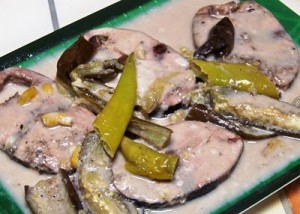 Based from the FAO (Food and Agriculture Organization) of UN, 25 percent of the Philippine’ cultivated land was planted with coconut trees, that is the main reason why a great population of Filipino people used coconut milk as a main ingredient in their dishes or recipes. Almost every menu has a touch of this ingredient because of its creamy taste. You can use this in cooking vegetables, meat and fish.

In this article, I will share an all time favorite fish recipe with coconut milk. So, here’s how to cook  Ginataang Tambakol.

This is another Filipino recipe that uses coconut milk that you can serve anytime you want. It’s simple and quick to prepare.