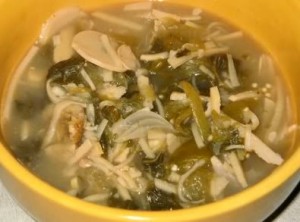 Bamboo shoot has always been part of any Asian cuisine. Whether be it on special menus or ordinary dishes served at home. Bamboo shoots grow in any part of Asia, especially on the Southeast Asia, so it is not surprising at all if there are different bamboo shoots recipe aroundAsiaor even around the world.

In the Philippines, bamboo shoots are called labong. And since the production of coconut is abundant in this country, their famous Filipino dish that uses bamboo shoot is Ginataang labong or bamboo shoot with coconut milk.

If you are wondering how to cook bamboo shoot with coconut milk and asking how does it taste, then read on. Below is the list of ingredients and cooking instructions you need to prepare and do.

Cooking Instructions to Follow on How to Cook Bamboo Shoot with Coconut milk:

Bamboo shoot is also available in can, if fresh one is not available in your country and it can be cooked as boiled vegetable or stir fry. You can also use shrimp in replace of crab.

Hope you enjoy your meal!