Miss Universe 2017 Will Be Held In Manila 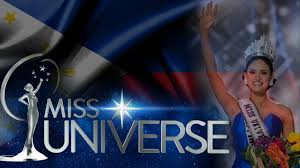 The announcement was confirmed last July 28 by Department of Tourism Secretary Wanda Teo in a press conference held in Makati City.

Teo said that the DOT is considering to hold the pageant at the Mall of Asia Arena in Pasay City.The secretary also told the press that President Rodrigo Duterte is requesting the pageant’s organiser’s to staged other related activities outside the metro so as to avoid the adding traffic.Some of the places being considered are Boracay, Palawan, Cebu, Davao, Cagayan de Oro, and Vigan.The government will not be shouldering the expenses amounting to $11 million.Teo said that the private sector will support it. Among the sponsors will be Japanese billionaire and Tiger Resort chief Kazuo Okada, as well as the country’s richest man, Henry Sy.

The Philippines has hosted the Miss Universe twice.The year was 1974  when Miss Universe 1973 Margarita Moran crowned Amparo Muñoz of Spain.After more than a decade the pageant came back to the country where India’s Sushmita Sen was crowned by Miss Universe 1993 Dayanara Torres.