Man Killed by His Own Remote Controlled Helicopter in Calvert Vaux Park in Brooklyn, New York 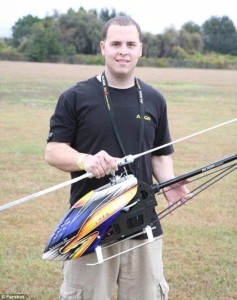 This young kid Roman Pirozek Jr. A 19-year old avid RC helicopter hobbyist and a member of a New York RC helicopter club just died recently after partially-decapitating himself with his own remote controlled helicopter.

Roman Pirozek was a vice-president of a local hobby club and was know to be aggressive in his flying.

The young man was posting a lot of his deadly helicopter trick videos on youtube showing his $1,500 6 pounds gas-powered trex 700 helicopter with 62 inches carbon fiber blades and spins at around 2,000 RPM.

And on his last day, Roman was just executing his spetacular trick when  he lost his control of his helicopter and the high-end gas-powered helicopter cut off a piece of his skull  and slashed his troat. The accident happened at Calvert Vaux Park in Brooklyn, New York, near Coney Island.

His father and the other 3 members of the helicopter club witnessed when the blade slashed him in the head and the throat on the way down.

“You’ve got something with whirling blades, it’s like knives, and you get hit with that it’s no joke,”