The controversial 16-year old girlfriend of the legendary  folk singer Mr. Freddie aguilar just broke her silence. Her name is Jovy Gatdula, and this is what she quoted on her recent interview.

Mr. Freddie was beside her during the interview and she cheerfully told how seriously and deeply she’s in love with her babe.  She even told how they met in Oriental Mindoro on an election campaign and also mentioned that she stayed with Ka Freddie for twelve days right after they met in Manila. 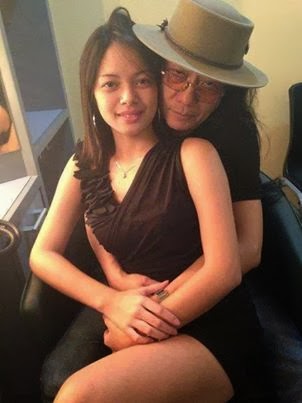 She was asked if she felt in love at first sight:

But during her 12 days stay, she felt in love with Ka Freddie. When she went back to her house, the girl just can and their jokes came out in a serious relationship. The two have been in a relationshipfor five months now.

Jovi said that she fell in love with Ka Freddie because he is so caring and he corrects her whenever she commits mistakes.

Watch the Video Below:

Many people were alarmed about the relationship of Ka Freddie with a minor. The singer is 44 years older than the girl. Despite the critism being thrown to them, the young girl doesn’t care and stays strong. She said:

The two were already discussing about their goals to settle down and to build their family together.

enjoy ur life and be happy in your relationship

what if you`re gonna be in the situation then people would talk about as a social climber while in fact you`re not.. what would you feel?? Freddies girlfriend don`t deserve that bullshit judgements of some people whom she don`t even know,. yes Freddie is wealthy,we can`t deny it, then what`s with that? why does everytime there`s an unpopular person who`ve been in a relationship with those of popular and wealthy one always reflected as social climber?? its just because people are insecure.. why they just don`t mind their own living instead of talking to the situation of others?? why people don`t just stay in the way they are just like what the lives of the people that they`ve talked about…

Corruption of minor yan period. This nation must be protected from this kind of predators or we will perish.

Hhahahahaa. Ya. He corrects her like a lolo because he is old enough to be her lolo.
It is all about money. And talk of building a family? Hahahaha. But no talk of marriage.
Welcome to the Philippines.