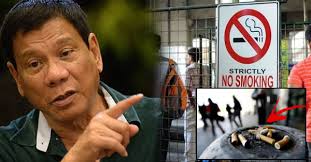 An executive order which prohibits smoking in all public places  awaits to be signed by President Rodrigo Duterte before the end of the month. The draft was a nationwide ban similar to that of Davao which  implemented by the President when he was still the mayor in the city. If it will be approved, smoking will be restricted in any public places be it in indoor or outdoor places such as bus stations,park or in public transportation vehicles.

According to  Health Secretary ( DOH )  Paulyn Jean Ubial the executive order was submitted last Monday and was being reviewed by the President. They are expecting the order to put into effect some time in October. The smoking ban in Davao has been distinguished by the World Health Organization ( WHO ) as an  effective way of eliminating the act of smoking and selling of cigarettes and tobacco especially for minors and the sick in an urban setting.

President Duterte used to be a heavy smoker but quit due to his health constraints . He was caught as saying that smoking doesn’t make any good  benefits than acquiring fatal diseases to both the smoker and second hand smokers and can cause cancer and heart problems.

As about the tobacco industry again opposing this tobacco control measures, Ubial said “It is up to them to oppose the measure. They will go against the President .”