How Does Cigarette Smoking Affect Your Lungs ? 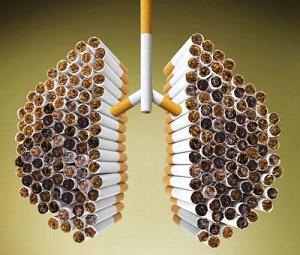 Cigarette Smoking poses a great risk on a person’s health. While health departments warn the people about the effects of smoking, still many does not falter to cease smoking. We are all aware that it increases the risk of stroke, heart diseases, emphysema, and cancer, but people are still lighting up.

Cigarette smoking is harmful to the body in a lot of ways.  The chemicals it contains including – tar, carbon monoxide, and nicotine are only among the thousands of chemicals that enter your lungs and respiratory tract.  It damages your lungs.   How does cigarette smoking affect the lungs , then?

The human lungs have tiny hair like structure which is commonly referred to as the Cilia. This hair like structure functions as a “broom” which filters harmful dirt entering the lungs.  And once you start to smoke cigarette, a couple of chemicals and toxins like the tar sticks and damages the cilia. Consequently, the dirt irritates the linings of the lungs thus resulting to accumulation of excessive mucus. That is exactly the reason why smokers cough a lot.  Coughing is their way to get rid of the mucus from the lungs.

Another way on how it affects your lungs is by enlarging the cells which produce mucus in your airways.  The amount of mucus thickens and as a result, it narrows you airway track and reduces the airflow.  It then causes an irreversible damage to the lungs in the presence of a disorder called emphysema.

How does cigarette smoking affect the lungs?  The scariest thing that might happen to cigarette smokers is by acquiring in complications caused by long-term smoking.  Because of the toxins, it may result to complications leading to shortness of breath and other chronic pulmonary diseases including bronchitis, pneumonia, and emphysema.  They cause irreversible lung damages thus slowly killing smokers.

The effects could go on and on. Certainly, these effects can be detrimental to your health that is why as early as now, quitting smoking is the best way to prevent yourself from falling into the trap of irreversible damages caused by smoking.

Thank you for this peice of information, it will certainly help me with my homework, which I am currently doing about smoking aand what effect it has on the lungs. This is a real eye opener, and I myself do not wish to take on smoking, though many of my family members have. If only they could see what it is doing to them.