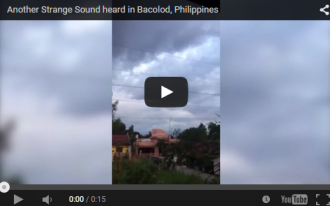 Just recently we heard all over the news in the Philippines about the strange creepy sound in Batangas City uploaded by a boy in youtube. Now another strange creepy sound is going viral on the internet and it was recorded in Bacolod City and Negros Occidental. These strange sounds have already been heard around the world and is believed by many to be the “start of the rapture” which is written in the bible.

Watch the video below: