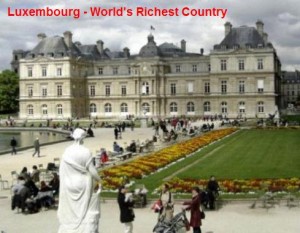 If you notice, even though Luxembourg is a small country with residents of less than 500, 000 people, it is the top one among the wealthiest countries all over the world.  On the other hand, Middle East Asian countries like UAE, Qatar, and Kuwait belonged to the list through their largest petroleum and gas reserves and exports thus leading them to be side by side with rich countries.  Although USA does not hold the top spot for the wealthiest countries, it is said that most of the billionaires lie on the cities of the country.

Other countries made their way as wealthy countries because of other reasons such as manufacturing of goods, foreign exchange trading, etc.  More names included in the list of world’s richest countries include Hong Kong, Netherlands, Australia, Canada, Denmark, and UK.

So, there you go.  Those are just some who made it to the list.  Are you hoping that one day you’re country will be one, too?  All the best!