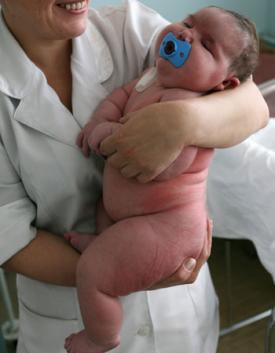 A lucky mother gave birth to an extraordinary baby.  It was a baby girl with the name Nadia Khalina.  She was welcomed to the world with the whopping weight 7.75 kg 9 (17.1 lb) on September 17, 2007.  She was delivered by a Cesarean section at a clinic in the Altai region in Siberia City.  That baby girl made a world record for being the fattest baby on earth.

The mother and child were both fine during and after the delivery.  But the world’s fattest baby was moved to a better hospital in Barnaul for better medical supervision.  She is just one of the 11 children in the family. She has eight sisters and three brothers.

The weight of Nadia is really unbelievable because according to international statistics, an average weight for newborn babies is about 7 lbs, 1 oz.  Nadia must be really fat and huge!

If you think Nadia is the heaviest baby ever, you are mistaken.  In 1879, a baby was born in the US and the Guinness Book of world Records registered him/her as the world’s fattest kid for weighing 23 lbs, 12 oz (10.7 kg).  Unfortunately, the poor baby passed away 11 hours just after birth.  The heaviest existing was born in 1955 in Italy with 22 lbs. and 8 oz (10.15 kg) at birth. Other sources say that the largest baby ever is Tomasso Cipriani with 28 lbs and 4 oz and the biggest baby was born in the Russian city of Irkutsk.  There was also a Chinese woman who thought to have delivered the heaviest baby, but it was a mistake. On the other hand, the smallest baby is named Rumaisa Rahman who is more than 16 inches long.

Search for the cutest and coolest picture of Nadia to see how amazing this child is.