Pinoys Are The Happiest Employee In Southeast Asia 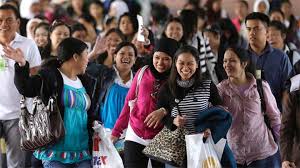 Jobstreet.com  – An online employment company mainly in Southeast Asia recently issued on Wednesday its 2016 Happiness Index Report which topped Filipinos as the happiest employees in their current job. The survey suggest 73% of the respondent said that they were happy with their jobs followed by Indonesians at 71 % ,Thai with 61% ,Vietnam 60 % and Hongkong 57%.

According to Job street.com country manager Philipn Gioca in a briefing in Makati said that Filipino are still the happiest workers in Southeast Asia. By industry government employees were the happiest,6.66 rating out of the 10-point scale followed by education and oil sector with 6.53 rating and 6.49 rating, consequently. Pinoys scored an average satisfaction beating of 6.25 on a scale of 0 to 10,with 0 being the “extremely happy”.

The Philippines ranked third in job optimism for the next six months ,Indonesia has the most optimistic workers ,followed by Vietnam.

Filipino employees are the happiest and most satisfied in Southeast Asia. Their positivism could be reflected in the country`s recent leadership and governance under Duterte.