Department of Justice (DOJ) just recently requested Department of Foreign Affairs (DFA) to cancel the passports of the 3 senators Juan Ponce Enrile, Jose “Jinggoy” Estrada and Ramon “Bong” Revilla Jr who were all charged with plunder at the Ombudsman. 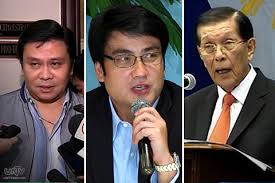 De Lima said that these politicians that are involved in corruptions who steals money from the govertment are no different from the terrorists, she said:

On the other hand, Senator Ramon Bong Revilla after his passport’s cancellation said:

“these moves only show the lack of justice in the country”

“I believe that impartial examination of evidence will  show that my integrity will be kept intact–that I will be vindicated by the truth that I didn’t steal anything from the country’s coffers. However, with these moves shown by the administration, haven’t I committed the mistake of believing that justice can still be attained?”