Kapuso reporter Arnold Clavio received a lot of negative reactions from netizens after his rude interview with Attorney Alfredo Villamor who is the lawyer of Janet Lim Napoles. 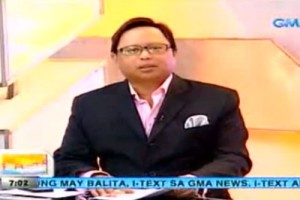 According to the netizens, Arnold Clavio is so unprofessional, rude and arrogant which is actually not new for me because I have already seen a lot of Arnold’s Clavio’s rude and unprofessional interview videos from youtube.

These are some of the comments I saw on social networks:

As I said earlier, this is not new for me because I’ve already witnessed a lot of his rude interview. One of videos I can remember as of now was the controversial news a year ago about Robert Blair Carabuena and the traffic enforcer Mang Saturnino. On the video, you can see how unprofessional this reporter is when he was asking a lot of sarcastic and inappropriate questions such as “Nakainom ka ba” to Mang Saturnino. Watch the video below.

For me, I already lost my respect to this reporter. What can I say? He is really arrogant, Unprofessional. I think he should be terminated for that. GMA should do something about this reporter.

Hey, Mr. Arnold if you can read this. You were  the one to call first to Attorney. You should be grateful that he answered your call.

What can you say about Arnold Clavio? What would you do if you were the attorney being interviewed with those sarcastic words? Just leave your comment below.

Arnold should be declare persona non grata in Philippine journalism as he has been a recidivist of disregarding the canons and code of ethical standard of a journalist. To insult a dignified lawyer in a national television is tantamount to assaulting a person in authority entrusted by law as officer of the court in the administration of justice. Let there be peace on earth!!! :)