Watch: A 3 Years Old Boy Was Brutally Beaten By A Passerby

A  horrifying video of a 3 year old boy beaten by a man in a street  is circulating now in social media. A young boy was seen walking around and sweeping in front of a certain shop. Several people were walking past the boy when suddenly a passer by  kick the boy on his head. The kid fell on his knees by the strong blow of the unknown attacker. He continues to stomp on the boy’s head several times .He also hit the kid with the broom and dustpan

A number of passerby just ignored the brutal beating while the boy lay unconscious on the ground. The violence lasted for less than a minute until a man and some concern crowd bravely rush out from a shop and rescued the poor boy. 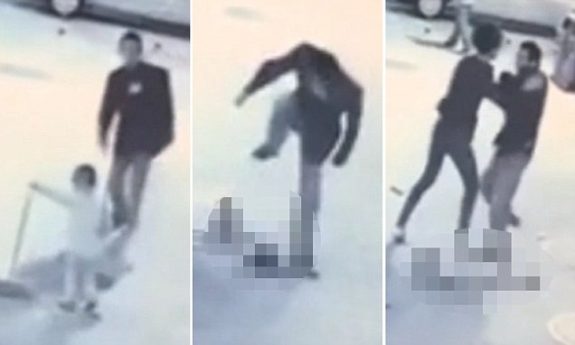 According to the news the short clip happened in a province in China 2015 last year. The attacker was reported to have arrested and undergone psychiatric assessment .

The young boy in the other hand had suffered serious head injuries but was conscious. The pounding of his head by the man resulted to a fractured skull and internal injury.