Hamonado Ingredients and How to Cook it 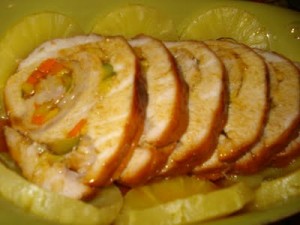 Pork hamonado is a popular dish which is perfect for holidays, like Christmas Day, New Year, or Thanksgiving Day. The word ham comes from the Old English word hamm. In 1926, George A. Hormel & Company pioneered the canned hams in the United States.

The Filipino cuisines have also adopted this recipe. From morcon, asado, potchero, chicken recipes to Pata or Pork Hamonado. Either they are adaptations or not, they are cooked in accordance to the Filipino style and of course what suits the Filipino taste buds (panlasang Pinoy).

Before the steps on how to cook hamonado, here first are the ingredients that make a hamonado be at its best:

Steps on How to Cook Hamonado:

Put all the sugar, salt, and praque powder together. Make sure that the mixture is covers the pork. Spread and arrange the pork fat slices and pineapple chunks. All ingredients should be used up. Roll then tie it using thread.

Mix the pineapple syrup and juice with the pork and marinate it overnight. For an hour, boil meat in marinade. Remove the thread and continue boiling the marinade for another 5 minutes and serve it as sauce. Let it cook. Slice the meat then serve.

How to make hamonado? Try the steps above. Maybe, a lot would like to master and have their own versions of cooking ham. This is also good source of income. You can have your own business out of your skill in cooking this recipe. Learn and be at your best.