Just wanna share about one article i read from theresilientearth.com about Shiva The Dinosaur Killer.

Asteroid impact is one of scientist’s theory about dinosaur  extinction. You probably heard about this many times and maybe you are wondering if that was the asteroid that hit the Northern Arizona and left a crater as big as a football stadium.  That’s because that was the biggest and the most popular crater that i read from encyclopedia and so i thought that it was the meteor that killed the dinosaurs 65 million years ago. if you think it was that asteroid just like i was thinking before, then you’re wrong.  It’s still small for it to kill all of the dinosaurs 65 million years ago and that crater in Arizona was just created about 40,000 years ago by a nickel-iron meteorite about 50 meters accross.  Many times smaller than what researchers recently found !!!

So, if you’re wondering where that bigger asteroid crashed that caused dinosaur extinction can be found, Well, Sankar Chatterjee and team of researcher have been looking at something known as the Shiva crater. This is located  beneath the Indian Ocean, west of Mumbai, India.  The size of the crater  is  approximately 600 kilometers long by 400 km wide and estimated to  be around 65 million years old which is believed to be the time of the death of the dinosaurs.  Chatterjee believes that this is the largest crater known on Earth and would have been made by an asteroid or comet  approximately 40 Kilometer in diameter!!!  The size is astounding.  Imagine a rock that huge travelling at the speed faster than sound smashed into earth.  It must have resulted in a great earthquake and huge tsunamis.  But this was not the caused of dinosaurs’ extinction.  Keep reading… 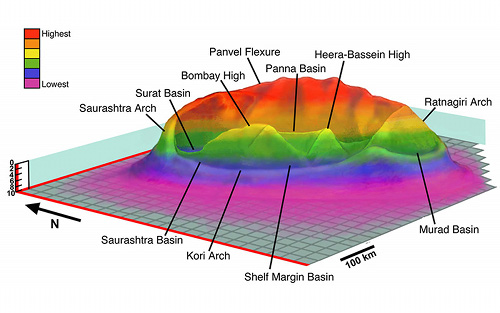 Three-dimensional reconstruction of the submerged Shiva crater (~500 km diameter) at the Mumbai Offshore Basin, western shelf of India from different cross-sectional and geophysical data. The overlying 4.3-mile-tick Cenozoic strata and water column were removed to show the morphology of the crater. Credit: S. Chatterjee.

if we look on the photo we can see an underwater mountain called Bombay high which is as tall as McKinley (5K) surrounded by Shiva’s crater.  According to Chaterjee the asteroid impact is powerful enough that caused magma to well up and create the mountain rapidly upward. The asteroid impact also caused the Indian subcontinent to break off and drift toward Africa, now known as the Seychelles islands.

Chaterjee and team of researcher found rich deposits of shocked quarts and iridium that can be found more commonly at asteroid impact sites. Chaterjee suggests that the impact may have enhanced volcanic eruptions altering the climate and hastening dinosaur’s extinction.

the best teeth whitening agents are still based on peroxides–‘

1500 different dinosaur types have been discovered by paleantologists.

Nice Article, Thats so big. Anyway, Do you know How Many Types of Dinosaurs Were There ? Im searching about my thesis and i stumbled here.

Wow, that meteor was too big. Maybe it caused the Earth to went a little out of its orbit.