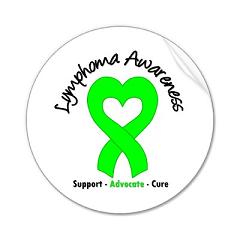 The lymphatic system has a purpose of fighting off infections. But even if that is so, the system is not exempted from uncontrolled cell division which will then result to malignant tumor growth of T or B-cell which may eventually lymphoma or cancer of the lymphatic system. The disease can occur in both children (Burkitt lymphoma) and adults. Continue reading on as we give you more details about lymphoma signs and symptoms, treatment, and survival rate.

The specific cause why the condition happens is not known. However, it has been linked to a couple of factors which increase the risk of its development. Some of the aggravating factors include:

Signs and Symptoms of the Condition

There are two types of lymphoma – Hodgkin’s Lymphoma and Non-Hodgkin’s Lymphoma (otherwise known as diffuse large B-cell lymphoma). Both these categories may fall in the same area and may pose the same warning signs and symptoms. Only via microscopic exam can these two types be differentiated. On the other hand, some of the symptoms include:

Depending on the area, it may produce symptoms such as persistent coughing and shortness of breath. Other signs seen may be fever, night sweats, unintentional weight loss, easy fatigability, and presence of rash.

Since the abovementioned symptoms may resemble any other disease, it is important that you seek medical attention immediately to further diagnose the problem. Blood tests, biopsy, imaging studies like MRI and CT scan may be done to validate swelling of the nodes.

How to Treat Lymphoma

Treatment method for the condition is actually dependent on several variables. How to cure it fairly varies depending on the type and stage of the problem. The patient’s age and health condition s also considered in planning the treatment plan. Chemotherapy and radiation therapy are the most commonly used method of care for the disease, but the main goal of treatment if to prevent recurrence of the malignant tumor. Drug combination therapy may also be prescribed by your oncologist alongside other comfort measures associated with the illness.

The survival rate of the condition usually varies. For Hodgkin’s lymphoma, prognosis is actually good since this can be highly cured although the mortality rate is said to have increased. There is an 80 percent rate 5-year survival rate provided that treatment is done accordingly. For the non-Hodgkin’s type, there is 65% rate of survival as a result of intensive therapies.

Although there isn’t any prevention technique to fully eradicate its occurrence, performing some tips to prevent the mentioned aggravating factors will significantly play a role in avoidance of the condition.